You are here: Home / JDB Insight / A/E/C Technology Disruption? You Ain’t Seen Nothing Yet! 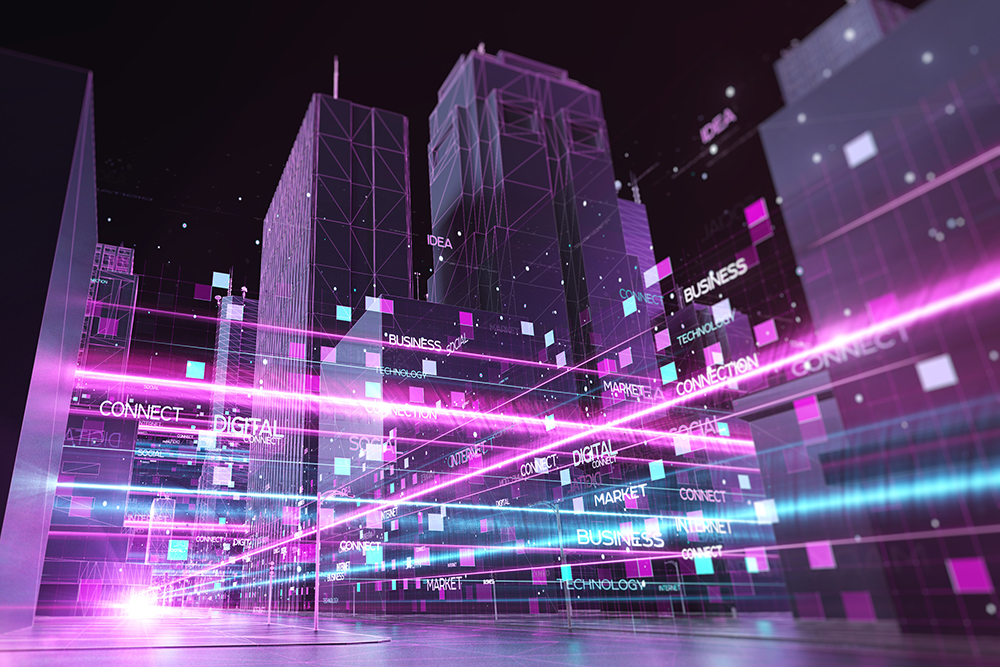 I recently co-presented about industry megatrends to an audience of architects. We talked about the utter lack of productivity increases in the construction industry over the past several decades. We looked at a chart that demonstrated how, in the 1960s, manufacturing and construction productivity were at similar levels. However, since that point, manufacturing productivity has doubled while construction productivity has slightly declined. And then my co-presenter, William R. Long, PE, LEED AP, FSMPS of P. Agnes Construction in Philadelphia said, “When I got into this industry three decades ago, we used to budget 40 hours for a drawing. Does anyone still use hours-per-drawing to develop project budgets?”

Quite a few people raised their hands.

He next asked, “Okay, so what’s the going rate these days?”

To a tee, everyone with raised hands said “Forty hours.”

Bill shared that he had just led a project management training program for several dozen architects and engineers, and they all reported “forty hours,” too!

Think about that. We’ve gone from hand drafting to AutoCAD to Revit. We’ve taken Building Information Modeling beyond 3D and added elements of schedule (4D) and cost (5D). We’ve evolved from hand-kept ledgers to Lotus 1-2-3 and Excel to robust cloud-based project resource planning software that everyone can access on their tiny portable computers, better known as smartphones.

We have advanced 3D laser scanners to accurately capture building interiors and sites.

We’ve been taught lean methodologies for design and construction, and utilized modular construction and prefabrication.

And yet construction productivity has slipped over the past 40 years – and designers are still budgeting 40 hours per drawing.

By the way, what’s a drawing? Don’t we create building models these days?

“The reality is that technology has enabled exponentially more options for accomplishing our goals today,” says Tom Traina, MBA, SCM, JDB Engineering’s business technology strategist and champion of JDB Insight. “The product and supply chain options available make our decisions more complicated than ever. These sophisticated models have increased the amount of information we have for making the best, most effective decision. So could it be that it takes the same 40 hours to make well-informed decisions?”

The sad fact that many A/E/C firms are facing is that profit margins are still extremely tight. It’s still a buyer’s market out there. Sure, some geographic regions are better than others. This applies to project types, too. But in general, we have limited ability to build robust profits into our projects because the market is so competitive. So if we can’t raise our fees – or if we refuse to raise our fees – then how can we possibly become more profitable?

And while it is critical that we embrace the technologies that are currently available – and that many of us already have at our firms – the reality is that massive disruption is coming to the design offices and job sites. And this change is in the form of technology.

Take, for instance, some of the things that are happening right now:

Yet design and construction technology is merely in its early stages of evolution.

Have you heard about Autodesk’s Project Quantum yet? Revit is getting pretty old – it was created in 2000. So what’s next? Project Quantum is not a replacement to Revit, but it will change the way Revit is used – and perhaps lead to a replacement. So much of the data in a construction project is siloed. Imagine if architects, structural engineers, MEP engineers, contractors, and fabricators all pulled from a single source of data. That was cloud-based. And represented the “one truth.” How would that change the way projects are designed and constructed? How could that enhance productivity?

Tom Traina points out that too many people in our industry look at BIM the wrong way: “Most of us refer to BIM as Building Information Modeling, but we get the ‘M’ wrong. It really stands for ‘Management.’ And Building Information Management is a philosophy, not a technology. Appropriate technology is used to improve efficiency and accuracy of project status when applied to sound processes.”

Autodesk isn’t stopping there, however. They are looking at automation and even artificial intelligence. They are working toward “generative design,” which is a human-computer collaboration. Humans enter the desired goal and key project components into the software, which then comes up with thousands of options. Data is qualified, the best options are evaluated, and then new variables are added to refine the designs. Yes, we’ll still need professional architects and engineers, but the machines will be doing much of the heavy lifting.

This would certainly create opportunities for productivity enhancements and higher profits.

But does the real opportunity come from actually being the disruptor? Tom Traina believes so: “The opportunity still lies in the execution of the designs, the construction. How can these technologies contribute to the construction of the project? The best design is only as good as its execution or construction. Centralizing the information is a great start, and the disruptive technologies allows users to reference and retrieve the information important to them on their own terms. No one controls how they will use the information provided to them. The firms that figure this out become the new winners – and when you displace the incumbent, you become the disruptor. These technologies allow disruptors to cut corners for efficiency and deliver on the job to be done. Uber simply leveraged a medium that both providers and customers already possessed, connected the service with the need using this medium, and got paid for making the connection. In the process they avoided the overhead costs associated with buying, licensing, insuring and maintaining a vehicle fleet and hiring drivers to seek out sales. The corner they cut was eliminating the chance of a taxi-for-hire intersecting a customer in need of a ride. What a waste!”

At the same time, the A/E/C industry is talking about BIoT, or the Building Internet of Things. Energy systems, lighting, security systems, parking, watering, etc. – these are all functions of a building and site that are being incorporated into the Building Internet of Things. How will this new technology improve the quality of buildings and work environments for occupants? How will A/E/C firms integrate their services with these advancements in technology?

“By providing more information to make better decisions,” believes Tom Traina. “The actual consumption of utilities is traditionally a blind spot for managers. The gallons of water used divided by hours of operation is a macro view. BIoT cuts a corner to provide a micro view to identify exactly which tasks and machinery consume the most water. People are the disruptors, but the technology enables it.”

Beyond the A/E/C Industry

There’s a whole world beyond the A/E/C industry – albeit a world that will greatly impact what our firms do in the future. Some futurists predict that the next car you purchase will be your last. Of course, some members of the Millennial generation aren’t even interested in getting a driver’s license to begin with, much less owning a vehicle. They have Uber and Lyft to get around – and in the future, these fleets will be autonomous. When families downsize from two cars to one car, and then to no cars, what will they do with more disposal income, not being tied to car payments? How will they reclaim their garages? Will there even be a need for driveways?

And what will become of all the parking garages in urban environments around the world? Today, parking garage designers are planning future uses into their designs. But the vast majority of existing parking garages don’t have much of a future. They will be demolished. How will cities reclaim these spaces? More new buildings – or spacious urban parks?

And speaking of urban parks, have you seen the EDG Loop in New York City? This concept utilizes projections for driverless vehicles creating far fewer vehicles clogging the roads, allowing some streets and highways to be for autonomous vehicles only – and other roads with dedicated lanes for these vehicles. The EDG Loop predicts much faster commutes around Manhattan – and envisions Broadway and Park Avenue becoming totally vehicle free, allowing for creation of new linear parks, ample greenspace, and no car-human interaction in these areas.

Of course, even the idea of driverless cars is perhaps shooting too “low.” NASA and Uber are collaborating to create flying autonomous taxis. And in Dubai, they’re already testing 2-passenger autonomous drones that hop from rooftop to rooftop. How will this change the fabric of urban environments? To catch a taxi or order an Uber in the future, will you have to go to a roof? How will buildings be repurposed?

Likewise, how will highway systems change in the future? Will there be opportunities to reclaim highways and streets around the world – either for new development or for green space? Will human-driven cars become illegal?

Tom Traina notes that “These extreme examples of change also increase the level of risk the customer will have to take. A successful disruption introduces a level of risk compensatory with the value of the solution. I am not necessarily willing to risk a take-off and a landing for 3-block ride, but what if it is too rainy to walk? So how much of this is attempting to force-fit nifty technology breakthroughs into a potential business windfall?”

We’re just scratching the surface with technology disruption. (Some futurists believe that we’ll have cyborgs by 2045.) However, these examples have a direct relationship to the built environment – either designing it, constructing it, or impacting it.

These current and forthcoming technologies will totally change our business models – and hopefully make our industry more productive and more profitable. Of course, we all need to be part of this solution, part of this future, lest we become obsolete. If future artificial intelligence will handle much of the design work, and robots and autonomous vehicles much of the construction, what is the role for humans?

“The role of humans,” says Tom Traina, “is to elevate their thinking to disrupt the traditional ways of doing things. Artificial intelligence will be used to work through permutations of a problem that humans have been able to do, but not as fast or accurately. It is not much different than a middle school student moving from learning times tables to using a calculator. Once armed with a calculator, you are now ready to tackle more complicated problems using complex formulas.”

So where do you think we are on the disruption curve in the A/E/C industry? Are we still at the times tables, or are we closer to the scientific calculator? What technologies do you think will have the greatest potential to add immediate value to the A/E/C in the near future? Which ones will be the most disruptive?

Concerned about disruption at your firm? Contact JDB Insight’s Tom Traina at 717.434.1581 or email him to discuss the challenges you are facing.